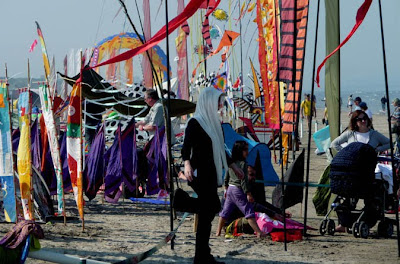 The kite festivals that we attend around the world each have their own particular celebratory nature. Some are huge events attracting thousands of spectators and hundreds of kite flyers around the world. They are like a circus aerial act, with performers launching their creations into the overhead arena, white lines stretching upward to the giant sky blue top tent overhead. 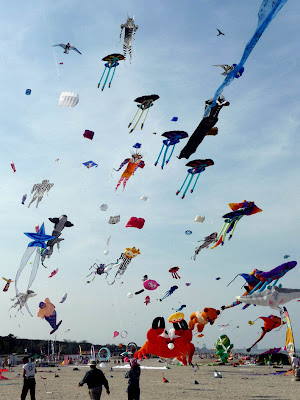 We flew to recently to attend the 30th annual Cervia International Kite Festival. That number, by all standards for kite festivals, is a long time running. There are only a handful of festivals that have that sort of history and still have the same organizers at the helm. This festival was started by Claudio Capeli, an artist and painter turned kite maker and then kite festival organizer. His daughter, Caterina always at his side in the early days eventually came on board as a co-organizer for the festival. His wife Giovana, helps and manages the kite store tent on the field.
From Germany, Anke Saur's Dot kite ..150 bridle lines! 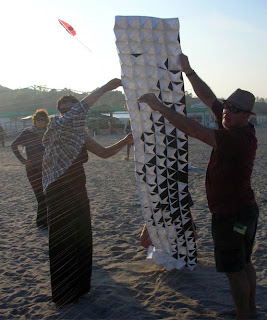 Cervia is on the upper calf of the boot of , about an hour from near Ravena on the seaside. As many times as I’ve been there as a participant, I’ve experienced the best winds along with some of the best kite flyers and makers in the world. This particular festival is a favorite among the art kite makers. It is a sky gallery of the most unusual and unique flying creations anywhere. People gather to share ideas and relax in this paradise of sun, sand, wind and clear blue skies.

Although the event spans two weekends, the days pass gently with no particular schedule except adding as much color and movement to the sky overhead as possible. It is rare that Melanie and I experience a kite festival with such perfect gentle and even winds letting us send almost every single kite in our tightly packed bags overhead all at once. When that happens, we hold our breath a bit hoping that it all stays aloft with no wayward kite bringing the whole show swirling to the ground. And, yes, that happened a few times as well. Tangles are a great way of meeting new kite friends. 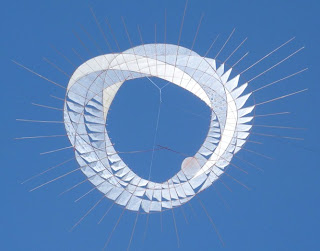 The festival used to be held in the city of proper on a large beach near the city center. A few years ago, it was moved south to the nearby beach community of Pinarella. The beaches are lined with the familiar beach club bagnos that are normally full at peak summer season. The festival held at the end of April and beginning of May is a welcome early season opener for the town and businesses as kite flyers flock to this place each year.

A parkland strip of pine trees separates the beaches from the town creating a pleasant buffer between the cars, restaurants and bars and the beach scene. Walking there from the town each morning was like entering another world. A row of tents were set up along the beach selling all sorts of goods including kite sellers, curious curios and clothing waving on hangers in the sea breeze. A short distance from the kite fields a large tent housed the children’s kite workshop. Each day streams of kids would enter the tent and make kites guided by some of the international kite flyers. At the end of each session they would hurry to the beach to try out their creations. The sky would bloom into a garden of dancing kites held by excited children. 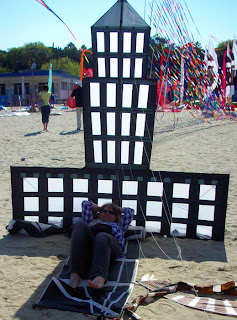 The kite field was split into several venues. One demonstration area reserved for the aerial acts of supreme sport kite teams and the king of multiple stunt kite flying, Ray Bethel from . Further up the field were single line kite flyers with some astounding ground displays of banners, tents, sand ants, beach art, spinning, floating and flying aerial art of all forms. Further up the beach, the larger kites floated overhead dwarfing the handlers camped out at the enormous sand bag and stake anchor points. The scene through the week passed with these giant floating creatures buffeting in the winds while some slept under the kite shadows or passed the time chatting with old kite friends. 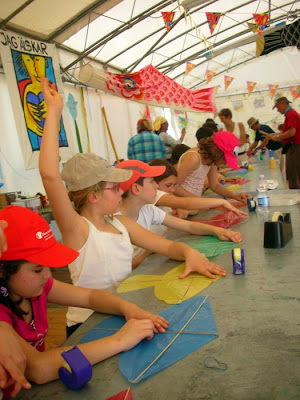 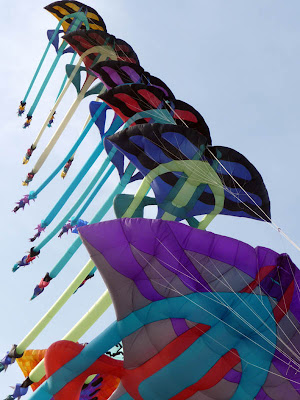 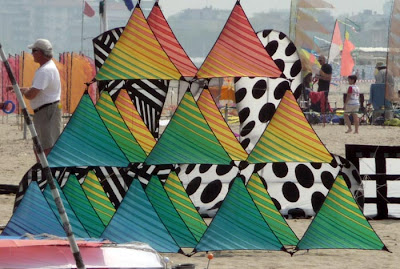 Our kite array and banners 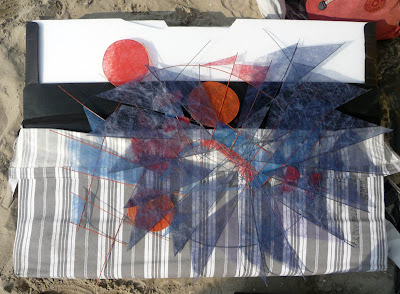 A portfolio of fine paper kites 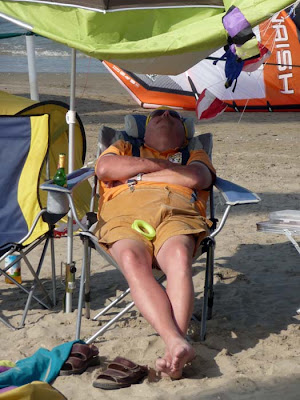 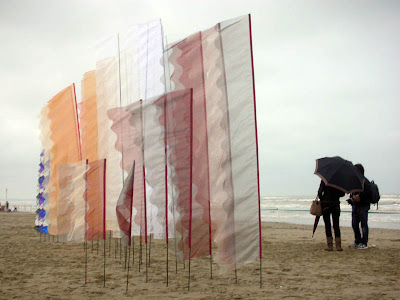 Banners by the seaside 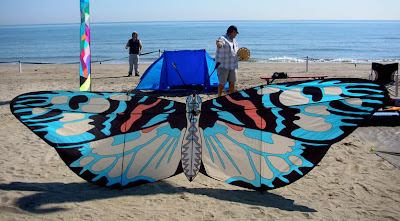 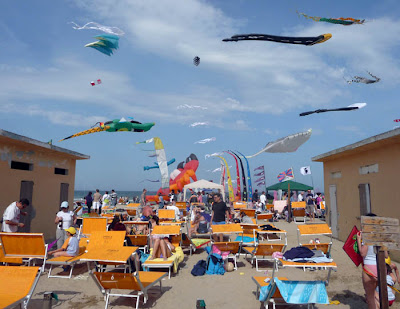 The public area beach side
It’s a scene that I’m familiar with but somehow, each time creates a memory like a dream that drifts by like a colorful cloud and then, while on the plane flying home, exhausted with warm and happy tan faces reminds us why we do this. It’s just so much fun! And ?...I have a hard time thinking of a finer place to pass the time under the Italian sun, on a beach with a few hundred kites overhead dancing in the perfect winds. Grazia Mille, Cervia! Until next time, Ciao!
For more photos of the Cervia International Kite Festival go to the Flickr slide show
Posted by George at 10:03 PM