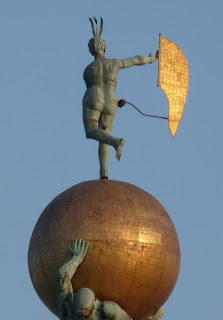 There is something grand about Italy. Maybe it’s the embedded history on every wall and each face. Or is it those clear skies and steady winds? When we were asked to come to Italy for two kite festivals, one in a little beach bagno community of Pinarella near Cervia and a second on the Lido di Venezia just outside of Venice on the Adriatic, we jumped at the chance. 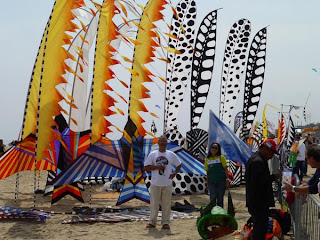 our kite and banner display in Cervia 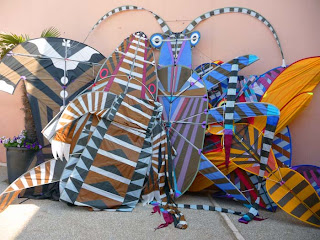 our kites after a day on the beach..
The festival of Cervia was held in a new location this year on a bigger beach, more room to fly, and a perfect wind for the ten day festival. Each day glistened with a sky full of kites brought from all over the world hovering overhead on the blue sky gallery ceiling. Each day brought great pictures of the scene and great times with friends we’ve known for many years. Sometimes it’s hard not to just pinch ourselves to make sure we’re not just dreaming this life up.
Each day began with a visit to ‘our’ bagno to open our storage lockers and carry the kites, banners and flying gear to the beachside. Setting up the show is always like putting on a circus. Banners go up, the colors are displayed, the colorful aerial acts start to rise to the big blue top overhead on kite lines angled up to the sky. Some people stand gazing at their addition to the overhead scene, others group together in beach chairs like fishermen watching their lines. We tend to try to see how many kites we can put up there at once… a constant challenge like juggling balls. The kites are tethered to sand bags and spread across the beach so that each kite has some airspace. When the wind is ‘clean’, like straight off the sea, the kites claim their space up there and hang almost motionless drifting together in an overhead aerial sky dance. I never tire from watching this. 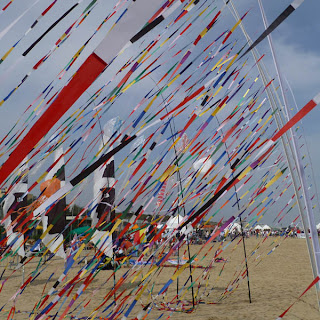 the Sardinian ribbon poles
The days passed with lunch treats of sumptuous food Italian style. In the evenings we all gathered at a central hotel along the beach boulevard of Pinarella that gave us a spectacular banquet each night. The waiters and waitresses rushed the plates in a frenzy of service keeping the pasta at just the right temperature. It is a hard job serving eighty hungry kite flyers each night. 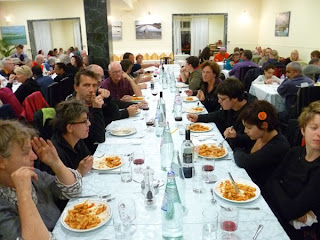 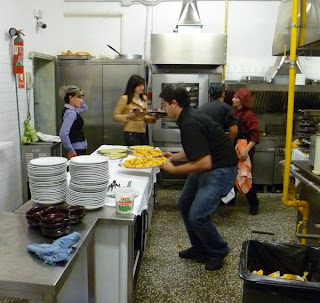 behind the kitchen doors.. 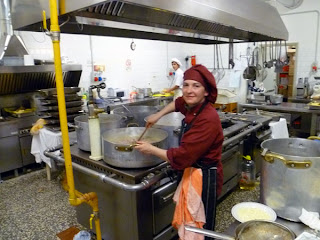 The prima chef
The festival drew big crowds of people each day. The beach tourist season was just starting and the kite festival, organized by Claudio Capelli and his daughter, Caterina, of ArteVento was a welcome event in this community of beach houses, hotels, bagno beach clubs and restaurants. I believe this was the 31st annual kite festival, one of the longest running kite festivals in Europe. 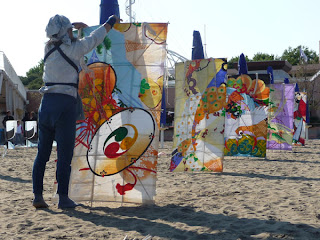 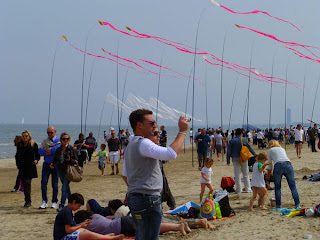 on the lido del Venezia
One might ask how a group of kite people can keep the colors up there for a full ten days on a beach without serious mental damage? The routine quickly takes front stage as every morning the kite flyers would wander in, choosing a spot on the beach to set up their ground displays, put up some shade and let a first lined kite up into the overhead sky circus. Over the course of the day the sky gets thick with kites dancing in tight formations over the beach. At about noon there were spontaneous little gatherings hosted by different country delegations for a refreshing drink and a taste of each favorite international cuisine. We hosted a US group picnic in our beach encampment serving ‘mini-Mac’ appetizers, mini pizzas, brown and white ‘wine’ (Coke and Sprite) and a big spread of small bite appetizers that were gobbled up in record time….then everyone migrated over to the German vodka tasting. 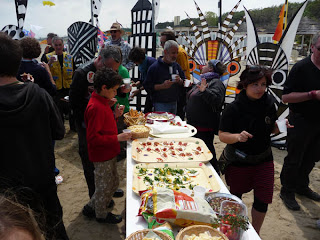 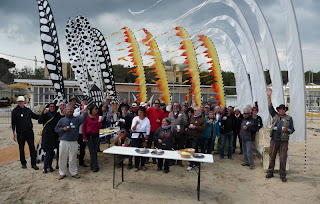 Each day we visit with kite flyers down the beach, keeping a sharp eye on our kite group making sure that they stay up and are not lost into the nearby pine forest or on the roofs of the bagnos. As the day goes on the wind always gets perfect as the stomach growls for dinner. Everyone then meets at the local dinner hosting hotel for drinks and a delicious Italian meal each night.

The second weekend after a disappointing rainy Saturday night fly evening that washed out the planned event we had a glorious last day in Cervia/Pinarella and then headed North to Venice the next morning. 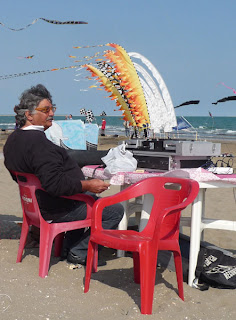 Claudio Capeli at the announcer's table 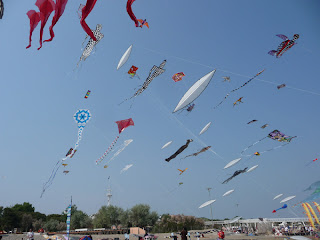 the sky over Lido Venezia

The Venice festival was attended by a smaller group of kite flyers from the Cervia event. Since this was the first festival for the Lido of Venice Claudio and Caterina were asked to help to organize the group of kite flyers chosen for the trip. Many details were kept a bit fuzzy but the kite flyers were ready for anything. Arriving at the field we were greeted by a beach full of umbrellas set up for the beach season on the rather small beach at the east side of the Lido. A large overhead steel pier bisected what was left of the beach. Not much room to fly kites or put up a large show. After a day of trying out the tight space it was decided to move the festival down the beach to another location in front of a large hotel that was closed at the time and being refurbished. The spot was perfect as we all spread our overhead kite show down the long beach. 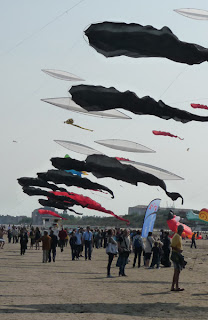 Each day was a perfect picture of kite fun. Crowds of people came and enjoyed the show despite the fact that the weekend featured some competition in Venice proper...the Pope was there on a special visit and the canals and squares were packed to the hilt with tourists and followers of the Vatican. Banners we set up down the beach. Kites floated overhead and each day was almost perfect conditions. 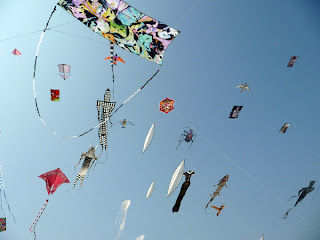 The last day we were the last on the beach packing up kites. Behind us an ominous dark sky loomed. Suddenly as the last of the kites were packed in our bags and we started to take down the banners, the wind picked up to speed sending an intense sand storm across the beach. Banners flew off poles, sand bag anchors blew tumbling and our Italy tans were sandblasted away.

The next day was spent dumping sand out of the bags and repacking in the garden of our hotel. We were told that plans had changed for our bus trip to the airport in Bologna and we would have to make it to the Venice train station ourselves… with our eight bags of gear and luggage. Somehow we managed to hook and strap everything with wheels together in a long train of gear and rolled down the main street of the Venice Lido to the water bus to the train station. One last trip through down the Grand Canal made us want to come again, again and again. Ciao Italy! 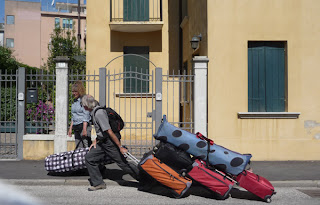 For more pictures of the Cervia and Venice International kite festival go to the Airworks Studio Flikr Slide Show.