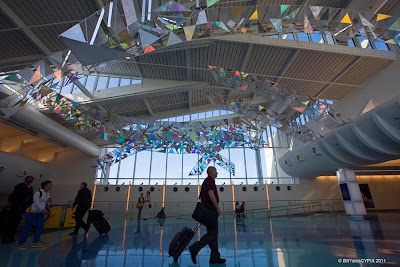 If you think of public art the most public place one can imagine would be the busy terminals and of our international airports. They are extraordinary transit zones and places where humanity is on the move. Both Melanie and I confessed to each other that we liked going to airports in our youth just to witness the drama of air travelers. There are lots of people waiting which is why I always took a sketch book to draw people there. People are busy sleeping, reading papers, checking their cell phones, hurrying to their flights and generally hanging out. In the rush of humanity on the go are people arriving, departing and meeting their loved ones in great shows of public emotion. Airports now have all distractions of ordinary street life with few places for rest. Occasionally there are rest zones for art to occupy.

In all the years we have been applying for public art projects both individually and collaboratively, airports have been at the top of our list. The link to aerial sculpture inspires much of what the work of Airworks Studio has been about for a very long time. From the flying forms of kites to banner installations, atmospheric suspended installation sculptures and kinetic wind sculptures. All have the element of flight and the movement of air over form. We have applied for close to a couple dozen airport calls for public art commissions. I became a finalist back in 1994 for the Denver International Airport before I was ready for a seriously large scale work. We’ve also been finalists for the Philadelphia International Airport arrivals hall.

Last year we were selected for a newly renovated concourse connector bridge at the Jacksonville International Airport in Florida. We had presented a proposal to the art selection committee of a simple group of suspended truss-like forms in gentle curves through the overhead space. We chose materials that were reflective, light reactive, transparent and colorful to cover the truss forms and give a light and airy atmospheric effect to the ceiling of the bridgeway.

The forms derived from the bridges of airplane routes one sees on those flight maps in the in-flight magazines that show arching lines connecting cities to each other. The paths of airplanes make contrails across the skies each day connecting people on these bridges across the sky. The white cloud lines are made from crystallized vapor trails and sometimes in the right weather conditions the sunlight catches prismatic ‘sun dog’ parhelion effects along the edges. 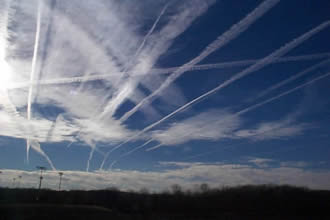 Another strong influence in our design for the works was the great number of bridges in the downtown and river front areas of the city of Jacksonville. There are bridges crossing the St. John river that reflect many eras of civil engineering from the classic steel truss bridges made with rivets and human sweat to the extraordinary gravity defying forms of the ultra modern bridges . The engineering of these bridges is breathtaking and the Acosta Bridge, the blue truss elevator bridge of Main Street and the harp-like lines of the Dames Point Bridge make Jacksonville one of the best bridge cities in the country. 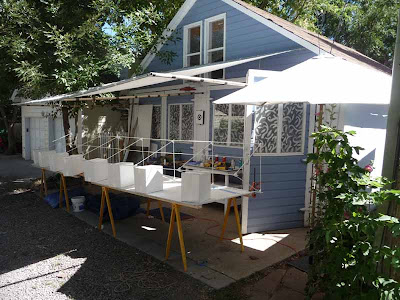 Work began in late summer of 2010 constructing the fiberglass rod frame trusses while we searched for a larger studio space for the fabrication processes. Our rear alley awning studio served as a construction space while storing the 20’ long truss units in the only space available… our back yard. Soon the weather dictated that we hurry with our search for an indoor studio in Boulder. After two months of searching we finally found a perfect space. It was a high end used car showroom just east of town with just enough space to store the frames overhead on the ceiling and brought down to the floor tables to complete the covering process. 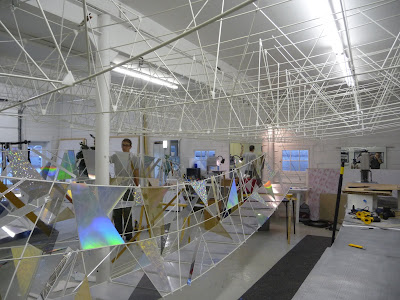 We recruited three university graduate students we’ve worked with before to help us with the laborious task of the covering the trusses with a lace work of aluminum, polycarbonate and dichroic materials. This process took us two months and about two or three thousand screws to attach all of the materials to the fiberglass frames. Spencer, Evan & Marianna worked tirelessly with us through long days to get everything done and ready for shipment. 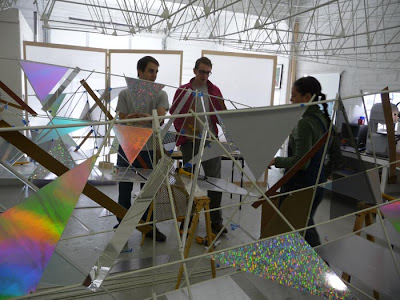 the studio got really full 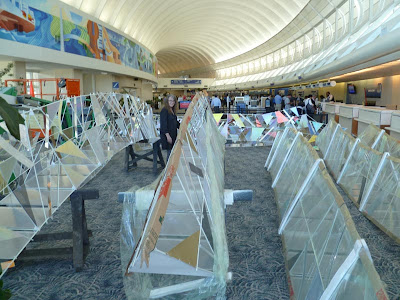 the units arrived at the airport... at the end of the ticketing counters 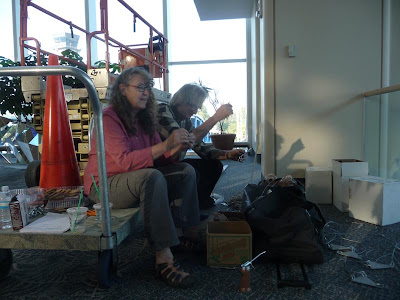 When all fifteen twenty foot truss units were complete everything was wrapped for the packing and shipping in a large cavernous fifty three foot trailer truck. We flew in six days later to meet the truck at the airport. Everything arrived in good condition thanks to carefully roped and strapped supports. The trusses were then carried into the front door of the airport and put in a staging area at the end of the airport ticketing area. We set to work immediately putting in a 10pm to 4am work shift each night for the six nights it would take to install the hanging eyebolts into the ceiling, the cables and the trusses. Fortunately we contacted a local sign company and arranged for some assistance with the hanging operation. Austin, Cleave and Larry from Harbinger Sign Company were tireless in their help in getting everything up. 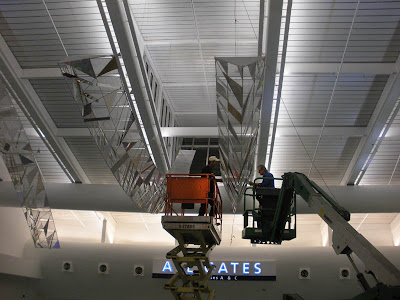 It all went like clockwork except for one small slip on my part the first night. While tapping the threads for an eye bolt to the ceiling steel tube beams the tap tool broke in my hand and dropped twenty five feet to the floor. I thought it had bounced harmlessly down the escalator below me. Further inspection by the airport maintenance crew later that night revealed the tool had bounced and ricocheted off of a tempered glass panel, shattering it into a spider web of broken glass. This may be the first serious damage done during an installation in over 35 years. My bad!

After a week all the trusses were cabled to the ceiling we switched gears to hang a kite show in the Haskell airport art gallery at the request of the Jacksonville Aviation Authority and public art director, Cabeth Cornelius. We had brought a group of exhibition art kites with us for ‘Kites & Flights’ that would be shown in conjunction with the dedication opening of the ‘Sky Bridges’ aerial sculpture for the airport. 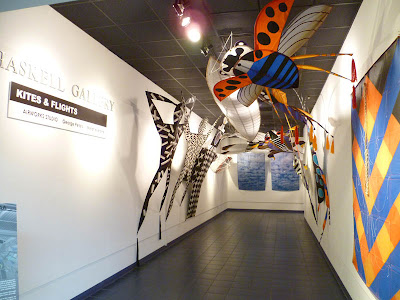 Lots of people came for the dedication and kite exhibit to see the final results of the Sky Bridges install. We hear many compliments for the works and everyone had great things to say about how well the ‘Sky Bridges’ sculpture fits the new concourse bridge way. A step back to see what we had done and we were ready to make our way home again. 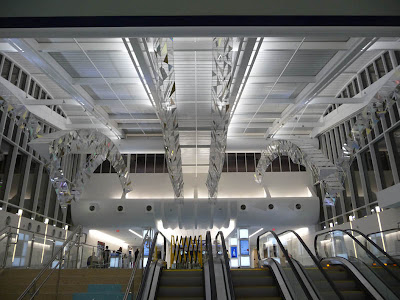 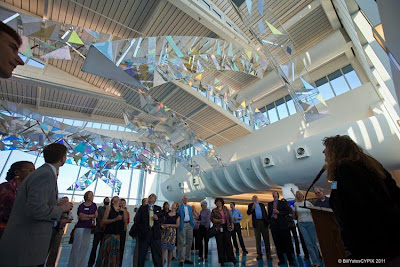 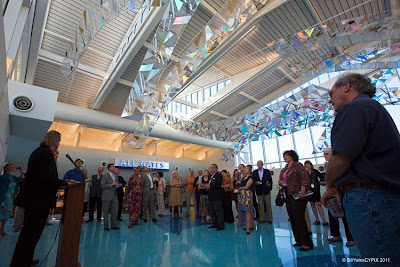 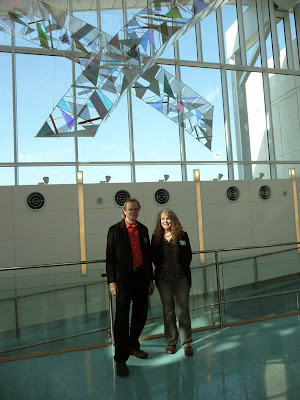 To see a slide show of the complete process go to our Flikr site.
Posted by George at 8:58 PM

Finally, I see, know, and understand the word WOWEE! Congratulations on this beautiful sculpture. Now, we'll all have to fly through Jacksonville en route to anywhere.

I was fortunate enough to see the kites as well as the main sculpture, but it was not till recently, returning from Burning Man that i had a late flight from Las Vegas and could see the sculpture from outside the terminal inside my plane!

Now, that, that was something!!!

Wow, and wow, indeed! Art can be very good around airports. In such a big place, with so many on the move, a piece of art often has to be big so that it can be seen easily and provide a high-impact, high-note greeting as one begins (or ends) one's travel.

Fantastic picture of a flying turtle on the wall. Children usually like fantasy, but this particular monster by Max Ernst may prove too scary, http://EN.WahooArt.com/A55A04/w.nsf/OPRA/BRUE-6WHKQP . But there are other more suitable pictures for children in western art that can be browsed at wahooart.com, from where the images can be ordered as canvas prints and sent anywhere in the world.

Learn how to book international flights for $100 instead of $1,000 with Travel Hacking.

Stage truss Toronto are really an essential equipment to bearing the weight. But here, they use more stunningly. They create different shape make it architectural designs. These structures are looking fabulous.