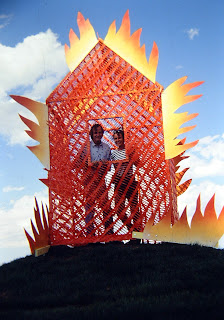 Years ago when Melanie and I first collaborated on a project together we did a series of outdoor house themed sculptures called “The House Project”. One of these houses was entitled “Fire House” for obvious reasons.

This image came back to us in a quite literal way recently when we were attending a music performance at a local venue here in Boulder. The phone rang in my pocket in the theater just after they told everyone to turn off their cell phones during the performance. I clinched the phone in my pocket to muffle the embarrassing ring. I snuck out to the lobby to see who had left the message. It was from Sanjay, our next door neighbor saying “GEORGE! YOUR STUDIO IS ON FIRE!”. Another muffled ring and message seconds after that first call was our other neighbor, Mary with a similar message and that the fire fighters were there dowsing the fire on our tool shed.

Melanie and I ran back home five blocks arriving breathless to the sight that no one wants to see. The blue and red lights surrounding the entire neighborhood with hoses snaking up the sidewalk and into our back yard where the Airworks studio and little wood shop shed are. The fire fighters had just put out the flames and asked me if I was the owner. The scene was surreal seeing the blackened trees and the stories of the neighbors about how high the fire had been and how freighting it was. Luckily the main studio was unharmed thanks to the heroic efforts of neighbors Sanjay and Brad. The sixty foot tower of flames would have taken the studio as well during the high winds that night that fanned the flames. They both grabbed garden hoses and kept the roof of the studio from the flames and heat.

The neighbors gathered in the alley each telling their stories of mysterious bangs and sparks that suddenly leaped into an inferno. The fire inspectors passed clipboards around for each of the witnesses to the heated event. As firefighters wrapped up their hoses one neighbor brought out a tub of ice cream and cups to cool things down and chat excitedly about the fire.

The next day revealed the extent of the damage. The inside was like some macabre set of the film “Alien” dripping with water, melted plastic bins of screws and washers and blackened power tools. Maybe half the tools in the tightly packed “smallest wood shop in the world” shed were beyond recognition. The fire had started outside near the trash bins and worked its way inside through a window and the eaves of the shed. Arson?...an electric short in the power lines above?...a tossed cigarette? All these were ruled out by the inspectors.

We’re now slowly getting back to normal and cleaning up the charred mess. Another wood shop has already been drawn up and we might be able to save a lot of the original structure that is believed to be over a hundred years old and has foot wide wooden board walls taken when the forests around Boulder were of virgin forest size.

Melanie has been photographing the remains which may lead to an artful conclusion to a horrible and heated event here.

the tool shop and outside dining area before the fire 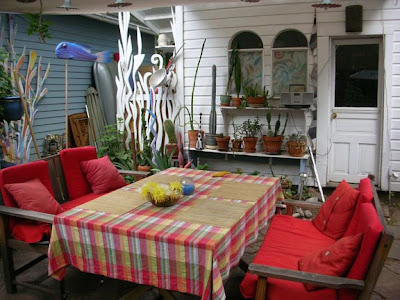 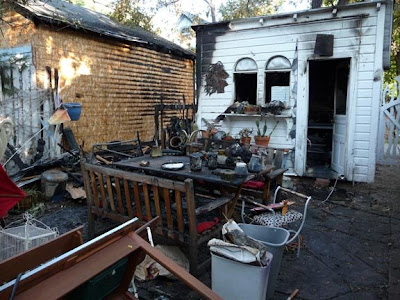 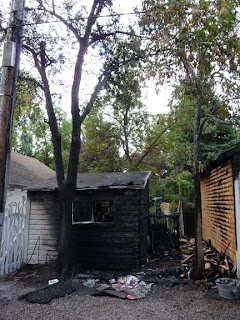 The fire rose into the surrounding
tree canopy and burned a neighbor's
garage. 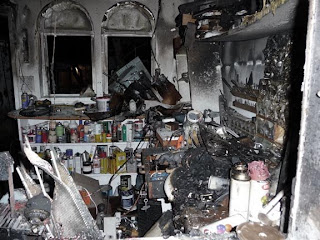 the heros of the night 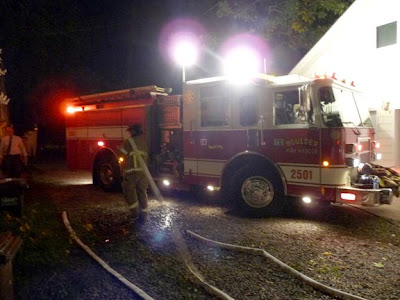 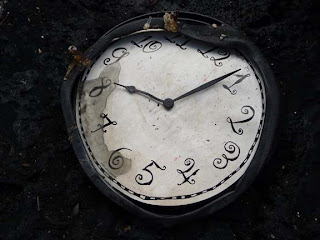 the exact time of the big melt 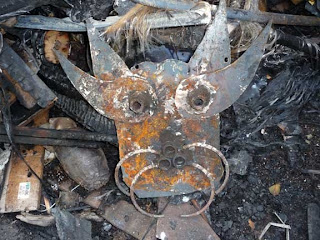 Yikes! That must have been so scary!

what a disaster. it must have been awful for you. typical of you two that you can make such a positive report out of what must have been a negative experience. Keep on smiling. its what you're good at - one of the many things!
good luck with the new project.

Wow. Love the artistry of the photo of the melted plastic bins. Sorry it took the fire to create the shot! It's great that you do keep a sunny disposition. Many wouldn't... but, hey! Stuff happens, calling for other stuff to happen in response -- and that's life, right?? Love you, Cuz!