A wind tunnel, some colored clouds and a stage village...

WIND TUNNEL
We’ve started on a city transportation project here in Boulder that was postponed about four years while the city went through some belt tightening. The project is actually an addition to a pedestrian/ bicycle underpass to the University of Boulder campus. We finished the east side of the tunnel entry in 2004. Now we’re onto the west side. The project will involve incised patterning into the “Wind Tunnel” walls, aluminum pattern facing, four wind vane pillars at each side of a pedestrian/bike bridge, a spiral graphic in the entry plaza and tile murals on the wing walls of a wind pattern image similar to the other side. 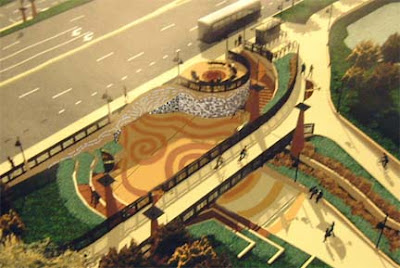 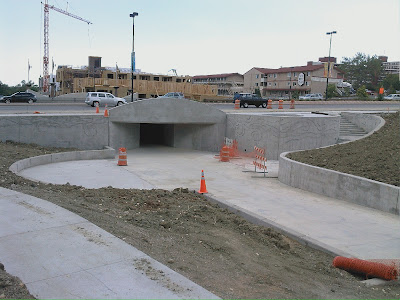 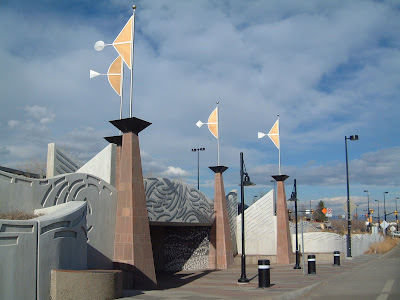 So far we’ve completed the incised patterning in the concrete walls and will work on the other parts of the project as it progresses through the end of this year and beginning of next. We'll keep publishing updates as the work proceeds.

We’ve also just finished a commission for the University of Colorado Health Sciences Center in Aurora. It is a series of sunscreen “clouds” that arc around a stair atrium in a new wing of the Anchutz Campus of the University complex. The work was commissioned through the Colorado State Arts Council as part of their Art in Public Places program. The concept was to merge the shapes of clouds and micro cellular structures in a colorful merging of similar forms. The Anchutz campus is a new addition to this huge medical studies extension of the University of Colorado. We had completed another commission here at the newly completed Anchutz Cancer Pavilion in 2002 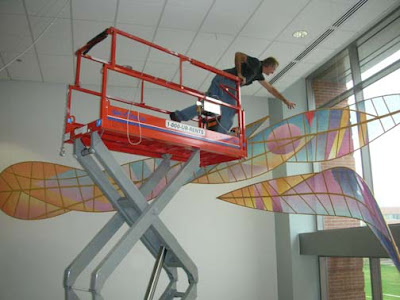 The long reach to the clouds

A panic call from Nick and Helen Forster requesting a stage set background for their nationally broadcast “ETown” radio show put us into the sweat shop to design and build the set pieces in a record three days. With little sleep we rushed the sunscreen set to it's destination for early morning 7 am set up. Arriving at the theater loading dock we started setting everything up but there was a noticeable lack of stage helpers...in fact, we were the only ones there. Eventually someone arrived and asked us what we were doing. "We're doing the set for the Etown show...is there someone to help lower the fly battens for us?". There was a confused look on the man's face. "This is the Auditorium Theater...you want the Buell Theater...that's next door". Oops!

We found the proper stage door to the Temple Buell Theater in the Denver Center for Performing Arts complex and set everything up. The show was during the frantically packed Democratic National Convention and was videotaped for a television broadcast in the near future. A great line up of musicians included James Taylor, Neil Young, David Crosby, Irma Thompson, Anni DiFranco and special guest Robert Kennedy Jr. and made for a fun, sold out show during the DNC nomination party for Barak Obama. 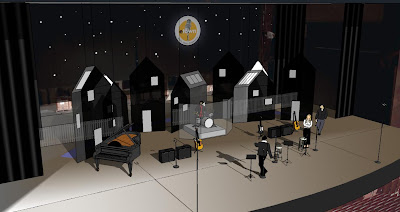 The view of the model plan 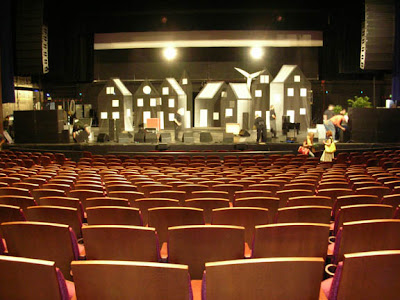 ...and the curtain comes up!

stage truss Toronto are really awesome material to set up an on-air design. It can be shaped in the desired way. It also helped to bear more weight than other materials because of its triangle structure.