THE MAKING OF IDEAS - Start to Finish 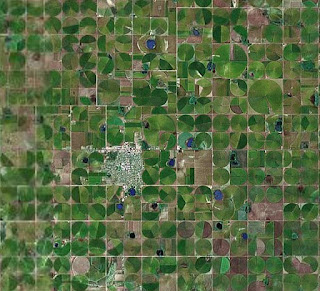 Public and corporate art projects are often a mystery to most artists. Having been in the field for quite a period of time since the early 1980’s and after completing over eighty five large scale commissioned art projects around the state, nationally and internationally,  I often look back in wonder why  I’m even still standing.

In making a large scale project it often takes a large amount of patience, communication skills, work with engineers, architects, art committee members, business representatives and corporate client CEOs. Sometimes we work with artist agencies who handle most details and other times we do it all ourselves. Either way the process is challenging and often rewarding.

Melanie and I are both process oriented artists. While the end product is certainly an important part of this process, our concentration and work takes place in the early stages of the idea and design. This stage then progresses to a formal proposal of a concept or maybe several ideas, then meetings with the client for feedback and approval, contract signatures, scheduling the fabrication and installation.

As artists we both tend to work intuitively and enjoy spontaneous design so planning a project one or two years ahead is often difficult. Generally we have a month to present a proposal of our concepts. After that our imaginations might progress to other directions with ideas, new thoughts, alternatives and new materials.  It’s always a learning process each time stretching our capabilities in increments along the way. 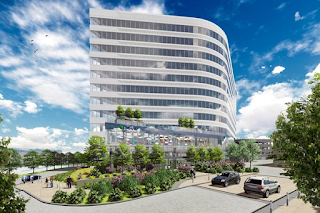 Last year we were approached by an art agency, Lewis Graham Art Consultants in Denver, to present ideas for a new building in South Denver that would be the new company headquarters for CoBank, an agricultural lending and financing bank for agribusinesses, rural power, water and communications systems. We were to present ideas and concepts for their atrium entry lobby space. The building construction had just broken ground and we prepared a package of our past projects for the agent to present to the CoBank  people. A short time after they expressed interest in having us put together some ideas and a proposal for the entry area artwork.  There were three other artist finalists that they are looking at so the proposal meeting is an important stage in presenting the idea.

Given that the bank is multi-layered in its involvement with agricultural businesses we chose to work with general abstracted themes within the framework of the concept.  Circular ideas kept presenting themselves, the cycles of seasons, the shapes of pivotal irrigation fields, the wide open spaces needed for farming and agriculture, the sky, the clouds, colors of fields throughout the seasons.  So many images along these lines started to create a theme in our heads within the volume of the atrium space of that split between field and sky.


My first aerial view of farm fields from an airplane taking off from Denver’s Stapleton Airport back in the early seventies astounded me by the beauty of that patchwork quilt below. I was surprised and delighted by seeing the circular fields that used pivotal irrigation systems from the air. How could I not have noticed them all the years before? This theme then started to dominate our approach. 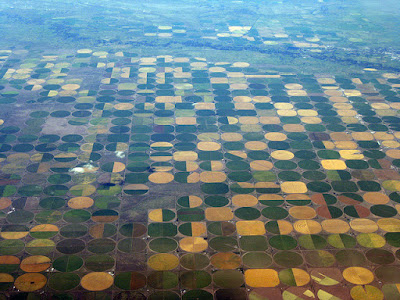 Two thin membranes on the planet, the arable soil layer and the atmospheric water circulatory system, create the living sustenance for all of life. The importance and connections of these two elementary systems to our civilization is deep in its history and immense in its mark on the earth.
In a world where the products of the farm and extensive agricultural practice is hidden from view of the consumer behind the veil of packaged food and stocked grocery chains, the only glimpse that most people have of the immensity of the agricultural endeavors and infrastructure this country has produced is during airplane flights of the much maligned "fly-over land". The casual view out the window reveals vast areas of the country that are filled from horizon to horizon with a quilt of farming fields each with a shimmering array of lakes and reservoirs, meandering estuaries of silver rivers, and hundreds of thousands of miniaturized farm houses, barns, stables and grain silos dotting the grid of roads below. It is this flat land and rural heartland that provides the nutritional ad economic sustenance to this country.
We both have traveled extensively as youths over dirt roads of rural America, witnessing firsthand the fields of dreams that a particular farm bred group of people called 'farmers' have cultivated. Those fields are a testament to the cooperative endeavor of growing the foods, tending the groves, the flocks and livestock on an endless carpet of green patchwork. Those flights have kept our eyes glued to the plane window watching the clouds and fields pass below us for hours and hours. 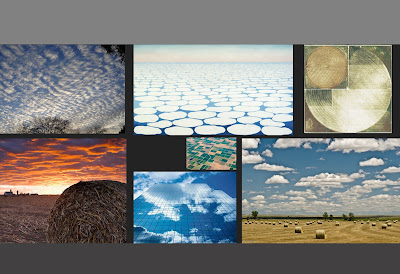 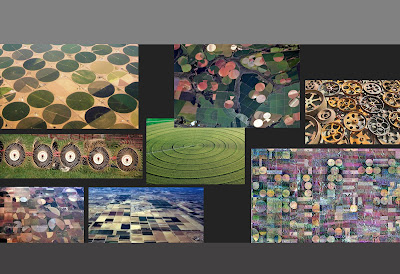 Since the art committee stated that they were interested in a kinetic sculpture hung from the ceiling we chose a play between random elements of movement and form with an ordered grid-like arrangement of mobiles that mimic the shapes of farm fields.  Grids of circles and grids of squares filled the sketch book pages.  We were also attracted to a more free form representation of circular overhead ‘cloud’ forms of free rotating white screen mobile units. 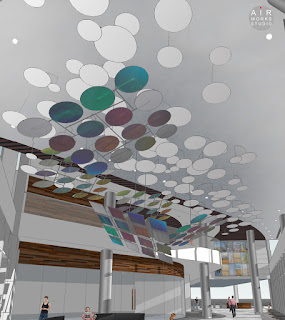 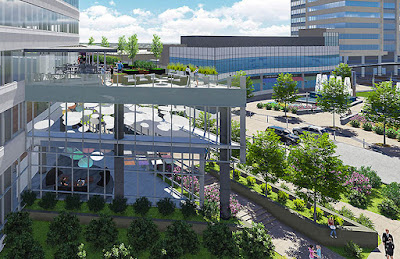 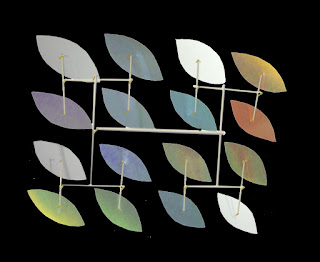 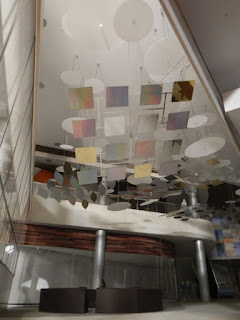 We presented many of our inspirational images as well as showing animated walk through views in a computer model simulation of the concept. There was a balcony lounge area overlooking the first floor area that required certain considerations like nothing should obstruct the view out the south window from that vantage point as well as how the light would play on the mobiles during certain times of the day and seasons.  In order to present a full representation of the concept we also had a physical model of the space with the mobile units in place.  This detailed model showing accurate material simulations are often a valuable part of visualizing the concept. It also helps us determine scale and how the piece will hang within the volume.

After our presentation it took a while for the art committee to decide. Usually when we receive the call or sometimes just an email we respond with a celebratory dance of glee followed a very short time later with “Oh, my god... now we have to make it!”

The first payment is received, the schedule is set, materials are purchased, finalized design details are ironed out and we begin making. First a hundred fabric circles that make up the sky cloud forms stretched onto fiberglass rod hoops.  The work is slow and careful but soon we have a momentum going. Next the ‘land’ form mobiles made from polycarbonate sheeting and painted with acrylic coloring. Also used were polychromatic and metallic laminated resin sheets that change color in the light and reflect color up to the ‘cloud’ form circle mobiles above. All units are then balanced and set for installing at the site. 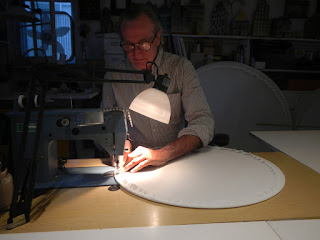 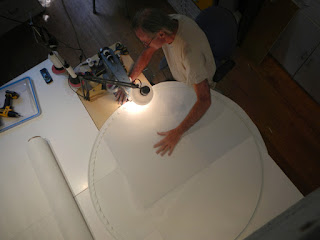 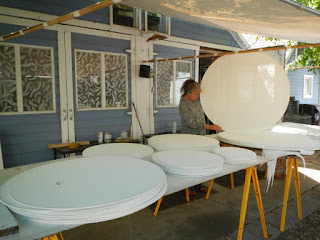 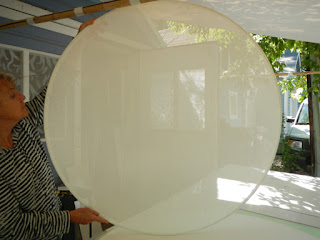 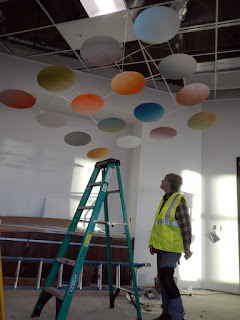 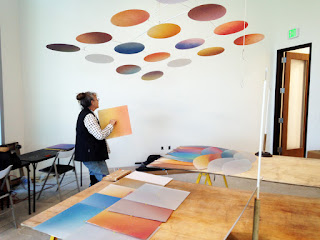 Installation at a newly constructed building is often difficult weaving our works around other contractors working feverishly day and night to complete the building. We use a scissor lift or cherry picker type lift to access the ceiling. Work continues day and night until everything starts fitting together like a puzzle. The plan fluctuates between following a plan and working on instinct when a work like this one takes up most of the atrium ceiling. It’s like painting and sculpting in the air. The work progresses slowly with trips up and down, checking positions, switching out pieces, making sure that nothing is touching while in motion. 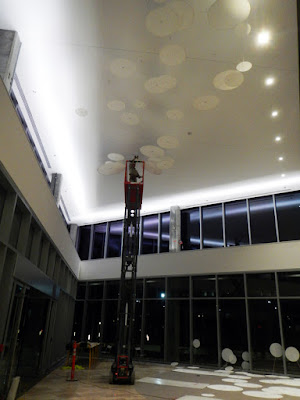 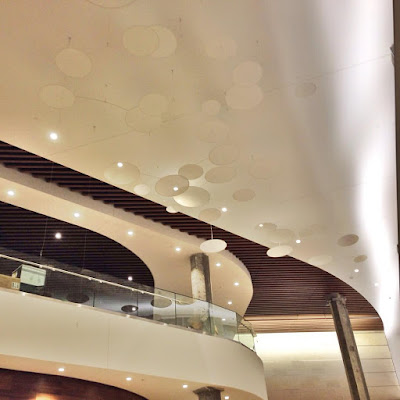 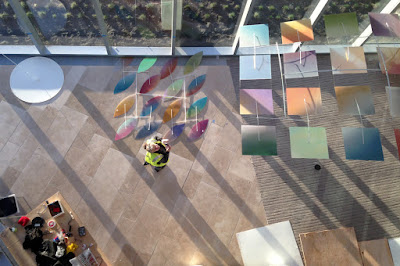 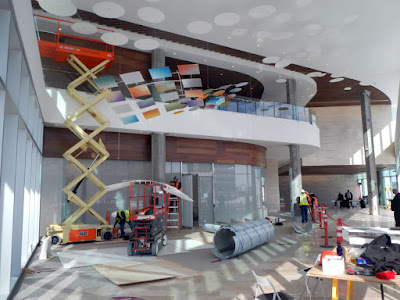 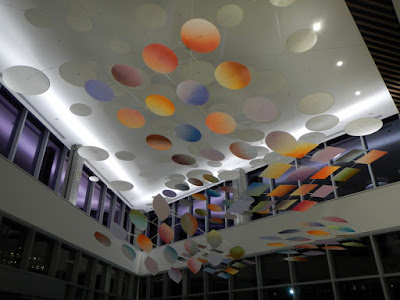 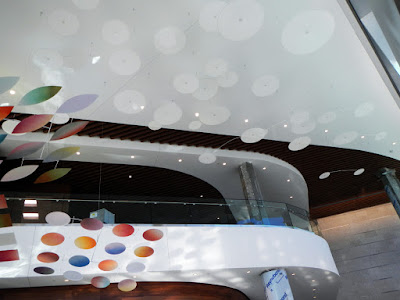 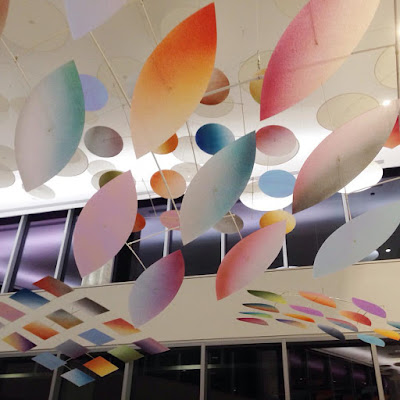 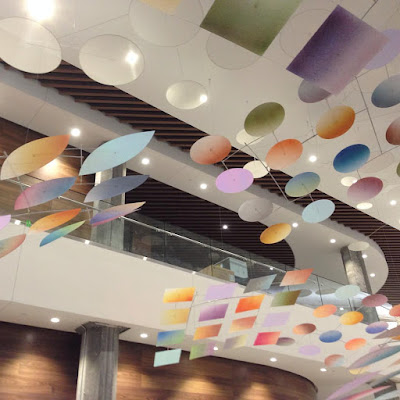 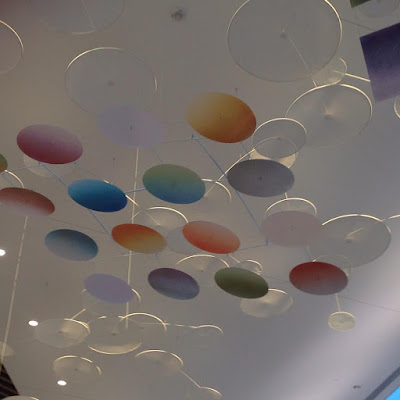 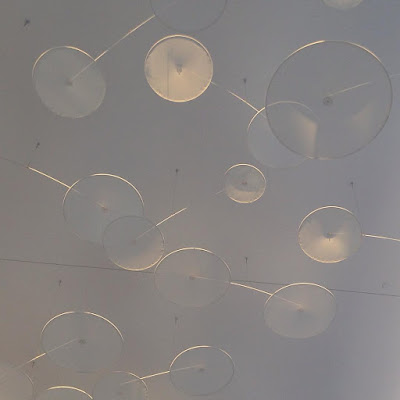 At the end of the last piece installed we get to stand back and see if it works as planned and then load up the van and head home. Many of the workers and contractors expressed their appreciations after seeing the progress and the model on display at the work site. Some of the bank workers occupying the first few floors of the building also expressed their pleasure with the work. Always good.

Dear George and Melanie, Beautiful work... Soaring ,head lifting work. Bravo,
Thanks for writing your account, too, George. A gift for all t o come.. Not always easy after
The exhaustion of completion. Hugs Romig streeter