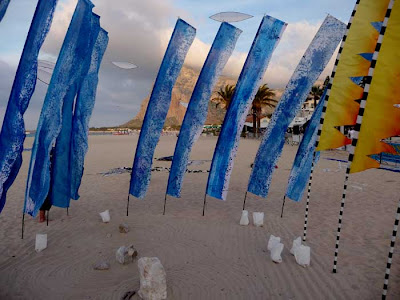 We packed our kites and jumped on the plane headed to the island of Sicily for a taste of Italy and to test the winds along the blue shores of San Vito on the North West tip of the island that is being kicked by the boot of Italy. The festival was the first for this area that promised a clean onshore wind, sunny and warm Mediterranean weather, great food, Sicilian hospitality and a group of some of our favorite kite making friends from around the world. What could be better?
Kite flyers were gathered for the event by kite artist and festival organizer, Claudio Cappeli and his daughter Caterina. Included were flyers from France, Germany, Austria, Italy, England, Denmark, the Netherlands, Japan, Australia, Canada, New Zealand, Ghana, Mexico and the U.S. Maria Gabriella and Ignacio Billera of Trapani Eventi organized the event details and hospitality in San Vito lo Capo.

We were greeted by a near perfect kite flying day for the first weekend of the ten day festival as everyone put everything into the sky to fill the beach with our kites. Some took to the cool waist deep waters holding their lines to the kite show overhead and commenting, “It doesn’t get much better than this”. 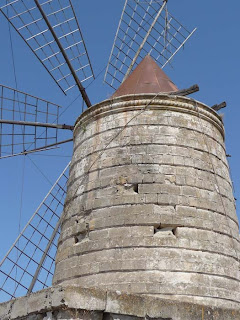 While some of the other days offered less than perfect winds, each day offered an array of activities including trips to small groups of kite flyers out to communities around San Vito for kite flying demonstrations and sight seeing forays. We were taken to nearby the seaside town of Trapani visiting the historic salt fields with old wind mill towers that used to pump the sea water into the evaporative salt beds. We then drove to an old stone hill village of Salemi in an area that was destroyed by a powerful earthquake in 1968. Salemi suffered from major damage and was reconstructed. We flew kites at the hill top church and from the fortress castle towers.

We then traveled to the nearby village of Gibelllini. This rural town was at the epicenter of the earthquake and was totally destroyed. Three thousand people perished in the quake while sleeping in their stone houses. The entire town was leveled in the disaster. As a memorial to the victims Italian artist Alberto Burri was commissioned to create a monument of concrete at the site of the town.
The result is a haunting maze of concrete covering the hillside. We flew for the spirits entombed there. We visited the new village of Gibellini Nouva that was built seven kilometers from the original town. All the surviving families were moved to this new villiage. Italian architects and artists designed the new town filled with memorials to the victims and families lost in the disaster. The new town modern apartments and condos obviously lacked the Sicilian flavor and the tight and narrow street corridors bustling with the sounds of families. 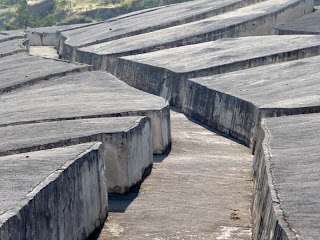 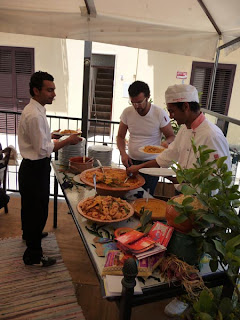 Returning to the kite festival, each day we were treated to lunches in different local restaurants, tasting the pleasures of Sicilian food. Cous Cous dishes are a specialty in Sicily and reflect the close interaction with North African cuisines. Along with the summer kite festival, there’s also an international cous cous festival in San Vito with the streets filled with tent kitchens serving a staggering variety of the dish. 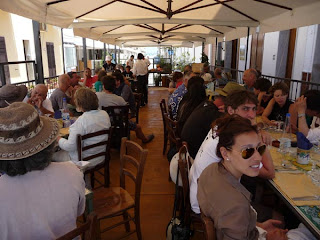 While some would say that flying kites for ten days on the Mediterranean while being fed delicious lunches, dinners and gelato is probably close to being the perfect job description. Another side of the job is carrying two hundred pounds of kites back and forth to the flying field each day, setting up the display of banners and kites, keeping things flying, dealing with shifting winds, kite crashes into the sea, avoiding dehydration, sunburn and sunstroke, chasing down kites that get cut down, climbing trees or darting between the traffic to recover them. Then again, it was still pretty fun.

The last weekend of flying brought a near perfect night fly and a day of clean enough winds to set a world record for shoulder to shoulder single line kite flying. I think there were about twelve of us in a tight lineup with kites aloft. 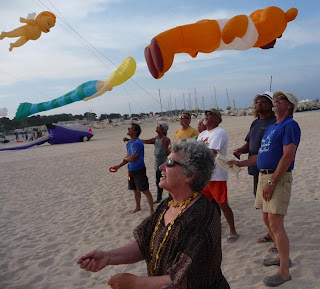 When all the kites were packed up on Sunday and the kite flyers gathered for a last meal in the dinner tent the wind picked up and started a sandstorm across the beach. Moments later sheets of rain and severe wind buffeted the tents. Leaving the next morning we learned that the freak storm had lifted the kite storage tent and the dinner tent during the night from the concrete stakes and totally destroyed both. Lucky no one was inside.

Flying back home brought some added adventure and a few scary moments. There was a flight delay in Rome because of the rain storm. That made a tight connection for us in Philadelphia. I was coming down with something the last few days and not feeling that well as we ran through the airport to get through customs and to our transfer connection gate. On the flight to Denver I passed out briefly and the flight attendant brought me oxygen. Then while driving home from the Denver airport I had an excruciating pain in my back and had to go to the emergency for what turned out to be a kidney stone. The last few days have been spent recovering in bed and the back yard lawn lounge remembering the lovely time on the beach at San Vito, Sicily. 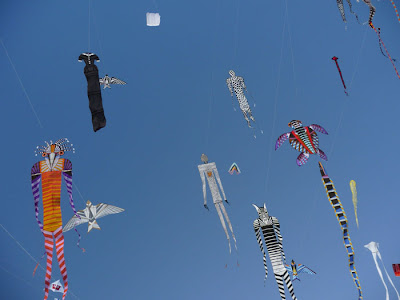 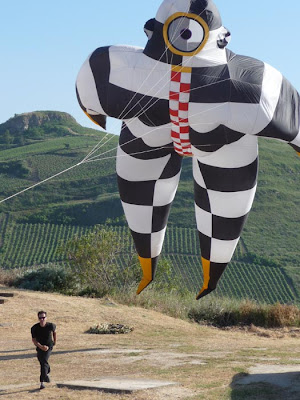 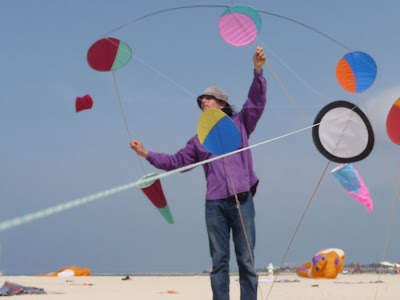 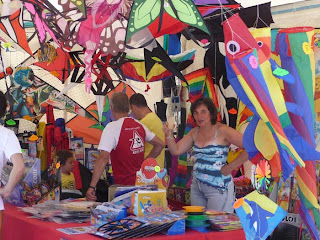 A kite shop on the street in San Vito 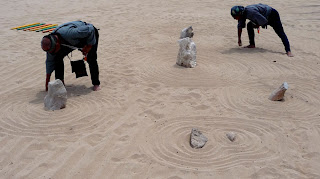 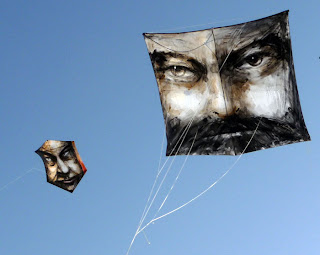 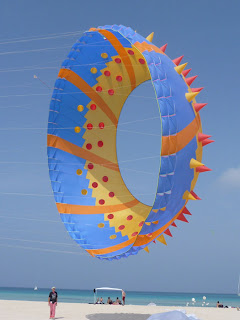 A large spinning 'bol' by Edwardo Borghetti of Italy 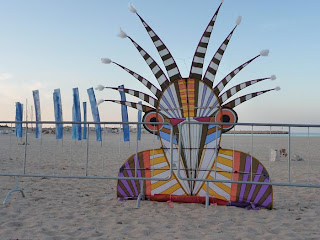 George's Bird Man kite at the end of the day

Enjoyed the account and pictures. Was unaware of the shoulder-to-shoulder kite flying record, and wondered what conditions are required. E.g. min line length? any old single line kites will do? min duration to make the claim valid?

We have researched the odd kite festival and also put quite some effort into documenting the local Adelaide events which involve kite flying. Check these out to immerse yourselves in some more Kite Festival atmosphere! :-) By the sounds of it, there are similarities between the weather here in Adelaide and Sicily...

Great pictures and write-up! What an adventure! I think you should make a kidney stone kite.

Shoulder to Shoulder world kite flying records are open for interpretations. Basic requirements are a group of people that don't mind tangles, a really clean on shore wind preferably on a beach in an exotic country, the people don't have to touch shoulders but be close enough for tickling. A photo is a must of both the flyers and the overhead kite group. Send 'em in to us for posting and for bragging rights.

This site is awesome! I really enjoyed looking at the pics of some amazing kites. What are all those architectural drawings about?